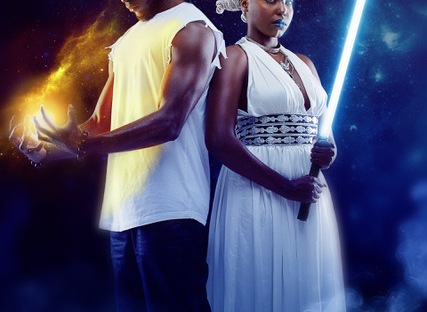 Black speculative fiction – whether literary, visual, or musical – has always been ready to remix influence from East Asian sci-fi, way ahead of the mainstream. I was reminded of this when I came across Universouls, a project headed by Berelson and Binta Talla, two black creatives based in Paris.

Inspired by a chance hair-do at a video shoot, where Berelson’s hair was styled to resemble a certain character from a fairly well known anime (it might help if you imagine me winking heavily as you read that), Universouls is a collaboration around two new characters, named Emanon X and the mysterious black woman superhero.

From the release statement:

The only thing we know about Emanon X is his superpowers. He woke up as a
young adult, with no memory of his past, like if it’s been erased or he suffered
from amnesia. He learns to master his super powers and skills: energy, night &
long distance vision with his right eye, telekinesis.

Some bad guys and creatures are after him, trying to eliminate him. He’s said to
be the last one of unique race.

Emanon X’s quest to his past will help him understand better who he is, his
original name, where he got his superpowers from, and his mission. Emanon X
is his code name, because of his amnesia. Emanon = “No Name” reversed (read
from right to left), and X is a a reference to the unknown, X-men, And even
Malcom X.

During his quest, he will meet a mysterious woman with superpowers too,
coming from another universe.

He has no information about her. Both of them just feel and know they have to
help each other on their respective quests. The rest is the hands of the destiny!

Mysterious Black Women Superhero
Who is she? Where is she from? Which are her superpowers?

You will have to stay tuned to discover the universe of this mysterious and
discreet queen.

All we know about her, is that she is really charismatic, her strength remains in her silence and her listening skills.

She also has amazing superpowers. Maybe you can start guessing by checking
the details on the photographs…

She is inspired by her creator’s personality: Binta Talla.

I caught up with Binta Talla for more insight into her work. 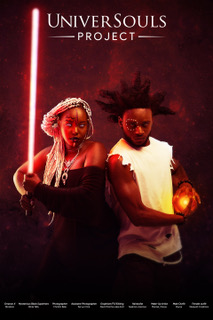 Binta has always been a fan of female superheroes and it’s easy to see where her passion for Star Wars is reflected in the character she has created. I was also interested whether she’s found any similar levels of inspiration from the world of anime, considering the origins of the project.

“I am really inspired by April, from Darker than Black,” she says. “There is more diversity these days though you have to look for it as the characters aren’t as showcased as white, or Japanese characters.”

Listing movies such as Cloverfield Lane, Transcendence and the Planet of the Apes amongst her favourite sci-fi, Binta is clearly interested in speculative fiction that has something to say about how identities and social constructs can be impacted and even impede our visions of humanity’s future.

April, from the anime ‘Darker than Black’

“I don’t feel limited by Planet Earth. I am a fan of everything related to space. I am really interested in both astronomy and astrology. I know there is more out there and it always fascinated me. Technology is another of my passions. How humanity can extend our capabilities with technology has always fascinated me. I always follow up technology magazines to know what has been recently created – I can’t wait to get one of those lenses that enables you to record what you see!”

Like many of us inspired by AfroFuturism and the depressing lack of blackness (or any diversity, let’s be honest), I totally appreciated Binta’s balance of mainstream genre fiction with a love for African stories. Citing Aya de Yopoungo and Khumba alongside her favourite anime, Binta is clearly someone with an eye on the global animation industry, as much inspired by the stories told on the mother continent as by Japanese anime.

“I would like more of us to realize that AfroFuturism is based on our culture, on what we are, on what has been denied value for years. We have one of the richest culture on Earth, and it has always been minimized, destroyed or appropriated.”</P

Speaking about where the project will go next, although she has lots of ideas and a full storyline planned for her mysterious black superwoman, Binta adds “it would be interesting to have input from fans. The woman is really mysterious. I already wrote everything about her, but I would be curious to know what fans thinks about her, what she inspires.”

I also can’t wait to see where this project goes. Global AfroFuturism is so fascinating precisely because it provides an opportunity for creative and political solidarity throughout the black diaspora and that is an opportunity which is definitely being taken up. To quote:

Art is the best way to achieve a state where it is no longer a fight to be recognised, [but one] where we just are. Black Europeans are raising their voice, and I [am] proud to be part of a movement that is no longer waiting to be offered a seat. We are and we will always be.

You can follow Binta on Twitter @just_bee_now. Also check out Borelson (pictured as Emanon X) @borelson. You can also catch up with Binta at the Cinema Network events in Paris.